Life changing book! It is eyes opening and mind bending book that everybody should read in their lifetime. First published in 1960, since then updated for modern times, this personal development classic is a gem to be treasured. It introduces the term of self-image and its importance in our life.
Maltz was the first researcher and author to explain how the self-image has complete control over your ability to achieve (or not) any goal. He developed techniques system that he claimed could improve one’s self-image and could lead to a more successful and fulfilling life. I recommend you to get the updated version which features the foreword by Matt Furey, president of the Pseudo-Cybernetics Foundation. In this version the original text has been annotated  with messages relevant for contemporary reader. Based on Wikipedia “Although the book Psycho-Cybernetics was first published in 1960, as of 2008 the book is one of 50 recommended in the book 50 Self-Help Classics.”

Before the mind can work efficiently, we must develop our perception of the outcomes we expect to reach. Maxwell Maltz calls this Psycho-Cybernetics; when the mind has a defined target it can focus and direct and refocus and redirect until it reaches its intended goal.” —Tony Robbins, “Unlimited Power”

The author-dr Maxwell Maltz- was a plastic surgeon who discovered that while some people’s lives change dramatically after their cosmetic operation, other’s lives didn’t change. After many years of experience and observations, he concluded that the major difference between those who succeeded and those who didn’t was their self-image- their view about themselves in their mind. For some people changing their physical appearance will change their view on themselves dramatically. Some people though, cannot be changed just by cosmetic surgery (sometimes they don’t even need it)- they need to change their limiting self-image to really experience their true potential.

A plastic surgeon does not simply alter a man’s face. He alters the man’s inner self. The incisions he makes are more than skin deep. They frequently cut deep into the psyche as well.” Maxwell Maltz 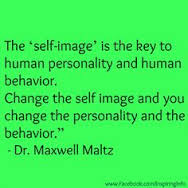 Maltz spent a huge part of his career putting together the self-image psychology with the the science of “cybernetics” which studies how things like guided missiles get to their targets through a clearly defined goal and constant adjustment of their course. Taken from the back cover of the book: “Psycho-Cybernetics is a term coined by Dr. Maxwell Maltz, which means, “steering your mind to a productive, useful goal so you can reach the greatest port in the world, peace of mind.”

The word ‘Cybernetics’ comes from a Greek word which means literally, ‘the steersman.’ Servo-mechanisms are so constructed that they automatically ‘steer’ their way to a goal, target, or ‘answer.’ When we conceive of the human brain and nervous system as a form of servo-mechanism, operating with Cybernetic principles, we gain a new insight into the why and wherefore of human behavior. I choose to call this new concept ‘Psycho-Cybernetics’: the principles of Cybernetics as applied to the human brain.” Maxwell Maltz

This books gives you a lots of tools for personal development. It will teach you how to improve your self-image, use your positive past, set and achieve goals and on the way discover the key to a happier and more successful life. “Psycho-cybernetics” doesn’t teach you what to think, but how to think in a way that your whole life will be transformed for better. You could improve performance in any area of your life by simply readjusting your approach to the world and yourself.

“Imagine how you would feel if you were already the sort of personality you want to be. If you have been shy and timid, see yourself moving among people with ease and poise—and feeling good because of it. If you have been fearful and anxious in certain situations—see yourself acting calmly and deliberately, acting with confidence and courage—and feeling expansive and confident because you are.(…)This exercise builds new ‘memories’ or stored data into your mid-brain and central nervous system. It builds a new image of self. After practicing it for a time, you will be surprised to find yourself ‘acting differently,’ more or less automatically and spontaneously— ‘without trying.’”

“Within you, whoever you may be, regardless of how big a failure you may think yourself to be, is the ability and the power to do whatever you need to do to be happy and successful. Within you right now is the power to do things you never dreamed possible. This power becomes available to you just as soon as you change your beliefs.”

“Skill in any performance, whether it be in sports, in playing the piano, in conversation, or in selling merchandise, consists not in painfully and consciously thinking out each action as it is performed, but in relaxing, and letting the job do itself through you. Creative performance is spontaneous and ‘natural’ as opposed to self-conscious and studied.”

“A human being always acts and feels and performs in accordance with what he imagines to be true about himself and his environment…For imagination sets the goal ‘picture’ which our automatic mechanism works on. We act, or fail to act, not because of ‘will,’ as is so commonly believed, but because of imagination.”

“Your nervous system cannot tell the difference between an imagined experience and a ‘real’ experience.”

“It is no exaggeration to say that every human being is hypnotized to some extent either by ideas he has uncritically accepted from others or ideas he has repeated to himself or convinced himself are true. These negative ideas have exactly the same effect upon our behavior as the negative ideas implanted into the mind of a hypnotized subject by a professional hypnotist.”

WHERE TO BUY: Amazon